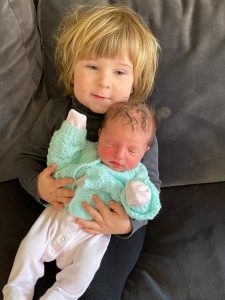 It just wouldn’t be Team Price without some excitement and drama and Miss Abel Casey Price decided that the combination of a full moon and the onset of Storm Ciara was the perfect time to make an appearance.

In the early hours of Monday 10th February Jonelle ticked all the boxes with the arrival of a beautiful little girl with no C section (too long a recovery time) no painkillers (not exactly the plan) and Tim by her side in a secret location in Wiltshire.  ( You can whisper “Swindon” if you like).

Of course we had the first squad training of the year booked in for that day and due to a massive fallen tree on the drive to Mere Farm we had already hastily rerouted the morning to accommodate Tim with his horses at Mere Farm instead of West Wilts Equesrtrian Centre.  This also meant rerouting Luis Alvarez Cevera who manfully rose to the challenge of actually getting to Mere which involved us moving huge round straw bales and attempting some rally driving through Sound Bottom which is basically a byway suitable for tractors, Shire horses and Land Rovers. Tim by this time was running on a mixture of adrenalin and exhaustion but due to his determination and a slick team at Mere he proceeded to jump 10 horses with Luis. Jonelle messaged from the hospital to say she was now “bored” and basically it was situation normal.

Otis is proud to introduce visitors to Abel with a prod in her general direction and the announcement of “that’s my ‘liddle’ sister”  before returning to his train set which appears to be far more interesting.

So….the Sunshine Tour beckons in under two weeks, the plans are in place for the spring big ones like Badminton and the other 4 star longs, the aim is to medal at Tokyo, welcome to the madhouse Miss Abel!