The SIHS was one of the pioneers of Indoor Cross Country and for several years they resisted the FEI’s attempts to slow it down and make it less exciting…it’s a huge crowd pleaser and has been the Thursday opening night top draw class since 2014 at the 30 year old show in the middle of Stockholm.

We spent several years pre Covid taking a “Down Under” team on the three day journey across Europe and learnt that experience counts at a show like this!  The partnership between a horse and rider is the nano seconds difference it takes to win these classes and the horses need to be worldly wise from the get go.

A change in format now as an invited competition with the likes of  Oliver Townend, Boyd Martin and Tim being offered catch rides in return for a plane ticket and a stab at the decent prize money on offer.  Sponsored by Agria the format is the top 10 event riders in the world plus a couple of wildcards competing over a warm up class on Thursday with the final on Sunday night.

If you think that the prize giving in Pau is a little odd then the opening of the show takes ‘over the top’ to a new level.  The stables are all indoor and  heated and everything takes place underground or in the main arena. The training times are mixed so you can be waiting for your main arena slot alongside an angel on a sparkly pony or watching the loosely termed ‘nativity’ group which bizarrely has the three wise men riding in fishnet tights.  Well, they may or may not be the three wise men but that was my best guess. Although I am not so sure that the fishnet tights are the wisest idea either. Throw in some reining ponies, some Icelandic ponies doing their strange trot and lots of overexcited exhibitors coupled with an enormous main screen as the back drop and it is quite the scene for an event horse to go through the tunnel to.

Tim arrived bright and early on Thursday morning and had a couple of training slots to make friends with his ride, Celladonn, kindly leant to Tim by his usual Swedish rider Christoffer Forsberg.  Celladonn has stepped up to the 4 star level this season but he came with a warning that he does have a run out in him and Tim found in his practice ride that he was really nice and forward into his fences which bode well and he deemed him a “Cool horse”.

As befits the World no. 1 Tim was last to go and, as always, a fair few of the less experienced horses suddenly lost top gear in the confines of the arena, the twisty track, the noise and the enthusiastic crowd.  Boyd Martin did a great job on a horse that looked ‘tricky’ in the contact to say the least, Oliver Townend’s chestnut got some proper stage fright and baulked at the silver birch oxer over a spooky black water tray before jumping up onto the bank and deciding enough was enough and he wasn’t going down off the drop.  It was  a fairly small drop compared to the Leaf Pit which was lucky as he then fell off the side of the bank and after a small battle with gravity Ollie dismounted and the chestnut looked mightily relieved to exit the arena at a walk.

Tim and Celladonn were another to lose power fairly quickly and after a pokey jump at fence three, the owl hole, Tim put his foot down and went for some more speed.  Celladonn was looking a little better, definitely careful and showing absolutely no sign of wanting to run past the fences so Tim turned up short to the water fence and Celladonn said, umm, I really think that is the scariest thing I have ever seen and propped to a decisive halt. Tim said, ‘mate, get a grip’ and rode down to it a second time like he was on a first timer out at an event, all heels and hands and gritted teeth so Celladonn did the brave thing and got to the other side.

It was a bit academic after that since they were well over the first part optimum time but Tim gave him a beautiful schooling ride and even found some seconds to return to the water at the end of his round and do some circle work around it. The round was won by Maxime Livio and the very experienced 17 year old Boleybawn Prince and the audience had a blast.

As Tim says, a few days now to build a partnership and if anyone can get a horse on side, it’s Tim. The final is on Sunday night, 8pm CET and it is live to watch on Horse and Country TV. 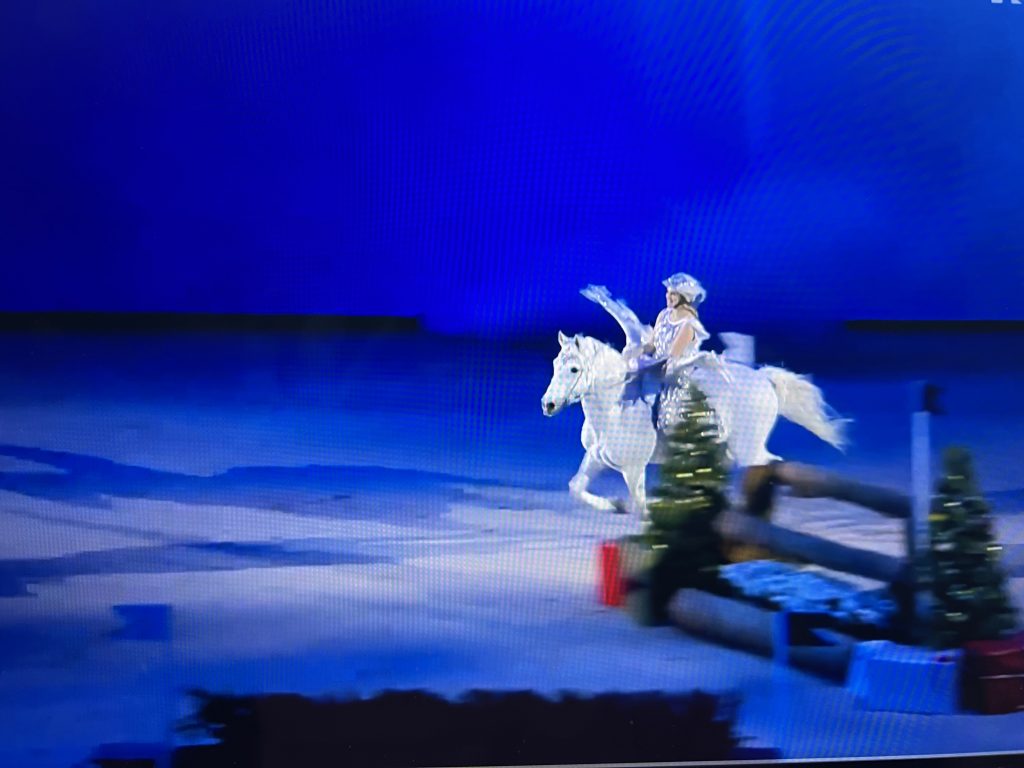