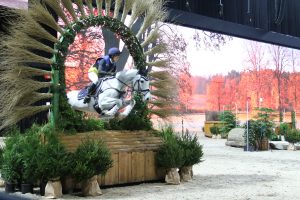 The indoor cross country season is upon us and Sweden may be 2 days travel away but it is the most generous of all the shows offering all expenses paid for horses and riders that are invited to participate.  It does take a specific type of horse… an older, more experienced one that has seen a bit of the world and is not phased by the electric atmosphere.

Amanda Breiditis generously loaned Tim her Boleybawn Fernhill (Sky) for the competition although as she said, it was a great excuse for her to go home and it meant that Tim had spent a bit of time riding Sky as well which Amanda found hugely beneficial! So totally a win win situation.

Its never the easiest trip to organise as Tim was the only kiwi that could go this year and the FEI have put some quite ridiculous rules in place such as only category A and B riders can compete so our top kiwi showjumper Grant Wilson was left out this year much to his regret!  We joined forces with Esib Power and Doonaveragh O One ( Tommy ), Joseph Murphy and Electric Cruise ( Sparky) and Peter Flareup and Frankie.  Joseph Murphy’s horsebox suffered an untimely malfunction upon arrival in the UK and Bruce Haskell stepped in quickly with the offer of his horsebox which genuinely saved the day!  David ‘Davina’ Edney, Katie Bleekman and Allan Fox set off to Sweden 24 hours behind schedule and we flew out to arrive before them which seemed a bit odd but it is such a brilliant horse show and such an amazing venue it just has to be done!

Tim rode Sky twice on Thursday, once in the arena familiarisation and again for the 10 minute practise time jumping through the spooky water and the keyhole.  Its a great system as it is a very unusual complex with logs in and out of a long plastic tray, built on one stride but which every horse in practise starts off  by adding and going through carefully on two.  Sky quickly go the hang of it after an initial suspicion and it just ensures its a good picture for the crowds later on.

A very quick course walk meant that the riders have to learn the track from the paper map pretty thoroughly and then the crowds really started piling in.  Suddenly it was 8.30pm and showtime!  A huge audience, packed to the rafters of the stadium and plenty of loud music, images on the big screen and a thumping atmosphere which the horses and riders simply loved.

A mini John Deere tractor was the first prize worth around €22,500 and Tim had a gleam in his eye as he spotted it in the arena!  Nothing like a boy and his tractors…  The team first prize was €8000, second was €4000 and third and fourth nothing.  Its a go for it competition.

They all went for it and Tim did his usual brilliant job with Sky.  Esib and last years winner Tommy had a turn back to a showjump that didn’t quite work out but were pure class everywhere else and Joseph and Sparky were quickest of all.  Peter Flareup was our drop score but he still did a brilliant job and The Mixed team won the team prize by just one second over the Swedes.  The young Swedish girl, Louise Svensson Jahde, ( see photo top left) made the crowd happy with a home win for the tractor and Tim gave it a rueful look in the prizegiving.  One day, I have no doubt, he will bring it home!

It was great fun as always and a cool way to end the 2017 competition with another win.