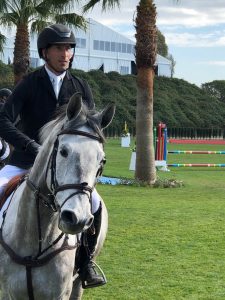 Well whilst Mere Farm and its inhabitants struggled with the storm from Siberia which brought in the most bitter east wind I think I have ever felt Storm Emma was causing havoc in Europe!

Tim got by far the worst of it.. he spent a couple of days at home and discovered that the cute and very old Little Thatch takes a while to warm up when it has has no heating on for 2 weeks and it is minus 10 degrees at night! Then he had to deal with snow and ice at Mere Farm which meant his planned 2 horses with Isobel Wessels in the indoor at Membury which should have just been a schlep down the road was not going to happen as there was no way that the horsebox was going down the Mere Farm drive without resembling the winter sport of skeleton racing!

Having abandoned that plan he then headed back to Spain the next day which was quite the journey as our airports are not coping very well.  The first flight was cancelled, he managed to get the last seat on the last flight to Marbella ( he wanted to go to Gibraltar!)  and then finally arrived with a 2 1/2 hour drive from Marbella to Vejer.

And then what happened?  The Sunshine Tour turned into the Downpour Tour with tropical rain and wind that battered the palm trees and swamped the grounds.  Jonelle turned into a storm chaser and was beside herself when she captured the lightning bolts and flashes last night on camera but was less than impressed to lose an entire days competition to the elements. I mean, while we dig ourselves out of snow drifts in the UK we are not entirely surprised to find all of our events cancelled but when you have driven 14 horses 1500 miles South in order to jump in the sunshine its a bit of a blow!

Photos from today (Thanks to Jo Preston-Hunt) show a seriously stormy sky in the background but it looks as though at least Hester ( Jonelle) and Spartaco ( Tim) have a start!  Fingers crossed they keep going for the rest of the weekend…