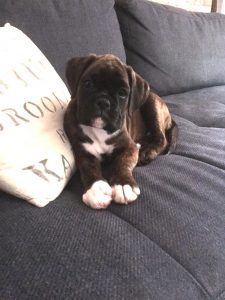 Firstly a belated welcome to the team to Scooby who made his international debut at Gatcombe this weekend! He may have big shoes to fill but he sure has ticked all the boxes so far!

After the rollercoaster weekend of Gatcombe and the trip to Haras du Pin planned for Tuesday night Tim managed to squeeze in three novices at Smiths Lawn and had a really good day which is not always the case of the novices after a big weekend away!

Hester was the star of the show and seriously impressed the dressage judges with a whopping 22 on the flat and she just added 2 time to that for a win which is always a great feeling!  Another dapple grey, Spartacus del Usignolo ( Spartacus to his mates) was sufficiently motivated after seeing all the attention that Hester got to go out and put up a great performance as well to add just 0.4 to his dressage of 30.5 for 8th spot.  Nothing like a bit of competition to get the Italians going!

Mr Cin Cin scored a smart 30.3, just tapped a fence out and then also sped round the cross country for just three time faults and 14th place.

So a really good day all round.  Tim now heads to France again while Jonelle is actually due today and she tells me she is drinking raspberry tea and Olive oil which sounds to me so totally disgusting any baby would vacate the womb in order to escape it!