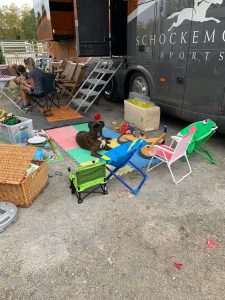 It seems kind of odd to be at Pau for the first 5 star of the season as it normally has such an ‘end of term’ feel about it whereas this year it feels like the beginning of something.  But some things never change and Pau is delightfully old fashioned and friendly with the horseboxes all parked around the warm up arenas just across the track from the lovely roomy stables.

Team Price have a row all to themselves right at the back which makes it very peaceful.  The big truck is next to the Burtons and has been turned into one big playground which Scooby is happy to guard and Abel is the lone girl in a big bunch of boys that call this bit home.

Likewise in the stables Faerie Dianimo ( Maggie May) is the sole Princess in a sea of boys with Ringwood Sky Boy (Ozzie), Wesko (Dash), Grovine de Reve (Rev) and Xavier Faer (Hugo) being her buddies.  Rev is much the youngest of the group and he is making his 5 star debut at Pau and he seems suitably impressed by the occasion.  He didn’t even barge straight into me at the jog which was a pleasant surprise so I am guessing his new found status as one of the big boys is having a positive effect.

The whole crew looked impressive at the jog which was held in fading light and Ozzie had to endure his worst nightmare when he was sent to the holding box and then had to represent on his own with his friends all back at the stables.  He coped manfully with it and was accepted and just like that we have 5 starting at Pau.

Hugo and Tim are the trailblazers today at the very sociable 1.30 pm swiftly followed by Jonelle and Rev at 1.44.  Ozzie goes later in the afternoon and then Maggie May tomorrow morning with Dash closing the competition at 10.53 on Friday.