Wow.. and we have waited all year to write the words 5*.  Pau didn’t disappoint with a true 5 star track that favoured the bold and had the usual mix of big and technical mixed up to add up to a track that needed accuracy and bravery as always.

Tim and Xavier Faer (Hugo) were the trailblazers and they simply stormed around the track with Hugo’s huge stride eating up the forward distances.  Tim ride his socks off,  Hugo has finally gotten over his “Groundhog Day”status and to jump around that track with just a couple of OI’s under his belt this whole season is quite something.  They came in just 5.6 penalties over time to sit in 19th which was a rise of 7 placings  and a really solid effort that kick started Tim’s day with a bang.

Jonelle was third out on Grovine de Reve which meant she started before Tim had finished but she and Rev were on fire from the get go.  She set out on a mission and Rev was incredible at his first 5 star as he answered every question and picked up off every forward stride that Jonelle asked for. He jumped in green and big at the second water but held his line like a trouper and really does deserve his new status as a 5 star horse. They moved up 10 placings to 13th with just 3,2 time and Jonelle was delighted with him.  It was a gutsy performance and a classy one as well.

Tim set out on Ringwood Sky Boy ( Ozzie) and it was so evident that their trust and partnership is as solid as a rock.  I think it was around 8 years ago that Ozzie came to Pau as his first 5 star and he walked through a few of his fences en route to his clear cross country.  He is not quite so dramatic nowadays but its sometimes a bit high maintenance to watch! Ozzie gets the job done in his own way and recorded yet another 5 star clear round to add to his huge tally for 6.4 time to sit in 14th spot just behind Jonelle and Rev.  It’s an extraordinary achievement for a 17 year old that has never, ever missed a single spring or autumn three day though injury. Quite the testament to Team Price management and Ozzie himself…what a legend.

Last to go and the star of the show Wesko ( Dash).  You wouldn’t say he came with the ideal prep with an elimination at the triple brush arrowhead at Dauntsey OI on his card but thanks to schooling session at Lignieres the wheels were re attached and Dash arrived full of confidence. He is no young gun either but he looked the business as he strode around the track picking off the problems one by one.  He finished just one second over time to move up a place into the top three and moved Tim into the modern history books with three clears round a five star in one day.  I am sure Equiratings will come up with the stats but safe to say it doesn’t happen very often!

None of this happens without two world class talented riders and their back up crew. Kerryn and Jess and Kelsey have worked their socks off this week and been fun, cheerful and dedicated thought out the phases.  HP Horse Health team Christiana Ober and Alice Dorman have put in the hours and been on hand for all of the horses and it really is a team effort for sure.

And Faerie Dianimo ( Maggie May) bounced out of her stable at 5.30 and was furious that she had missed her crack at Pau. As Jonelle said, it was a track that would have suited her as well…. hey ho…we save her for 2021 and she might be mad tonight but hopefully she will get over it! 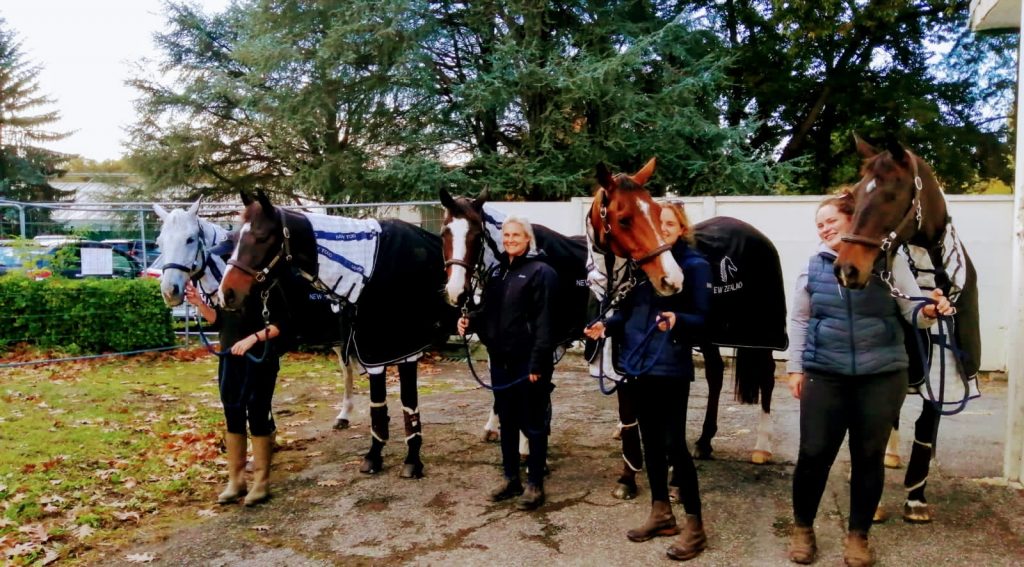