The last one day of the season and of course it had to be miles away! Any event North of Burghley counts as “miles away”.  But no early morning start as Jonelle’s first time was 1.30 pm so at least she didn’t have to get up in the dark on her birthday.  ( Well, I knew it was her birthday when several people commented on it at Oasby and since I write down Jonelle’s date of birth several hundred times a year on forms I have absolutely zero excuse for forgetting it!). Faerie Dianimo ( Maggie May) and Cloud Dancer ( Marley) were her rides for the day and as well as a big turnout from the Marley and Me syndicate Tim had also rocked up to play spectator for the day.

Maggie May had just the one spit in her test but it was a fairly dramatic one and a score of 34 was pretty fair!  I didn’t see the sheet so I don’t know what she got for submission but I don’t assume it was much!  Having got that out of the way she walked calmly back to the truck on a loose rein as is her habit.  Marley was much more businesslike for a 25 but he also displayed a couple of ring rusty errors so that was also a fair score.

No excuses weather wise either.. we basked in glorious autumn sunshine which is unheard of at Oasby and the going was on the firm side of good in places.  The showjumping warm up was not the happiest place on the venue as the steward, whether by design or under instructions, was running an ” on times/number order only ” system which simply never works.  The professionals got frustrated, the steward got flustered and even Tim’s legendary ability to make someone give in to his request wasn’t working!  Jonelle did get to jump Maggie May ahead of time but they still insisted on having a course walk which was neither needed or used!  Maggie May jumped her socks off for a clear and Marley followed closely behind with one of the best one day rounds he has jumped despite  threatening to buck Jonelle off on a turn!

The OI cross country was a hot affair with Jonelle, Sir Mark Todd and Jonty Evans with the public owned Cooley Rorkes Drift all vying for the lead.  Both Maggie May and Marley gave Jonelle great rides and she looked as polished as ever in the saddle.  Tim hung out on the course with a beer in one hand, his phone in the other and his baby in a pram which was mostly pushed by Leslie Richards although Tim claims that she insisted and kept taking it off him.  He took some pretty average photos despite the wizardry of the i phone 201 he held in his hand so we have no doubt he should stick to his day job and Libby Law is safe in her position as official NZ photographer!

This is a nice shot of Jonelle galloping cross country…but his aim was to photograph her jumping the fence that is behind her! 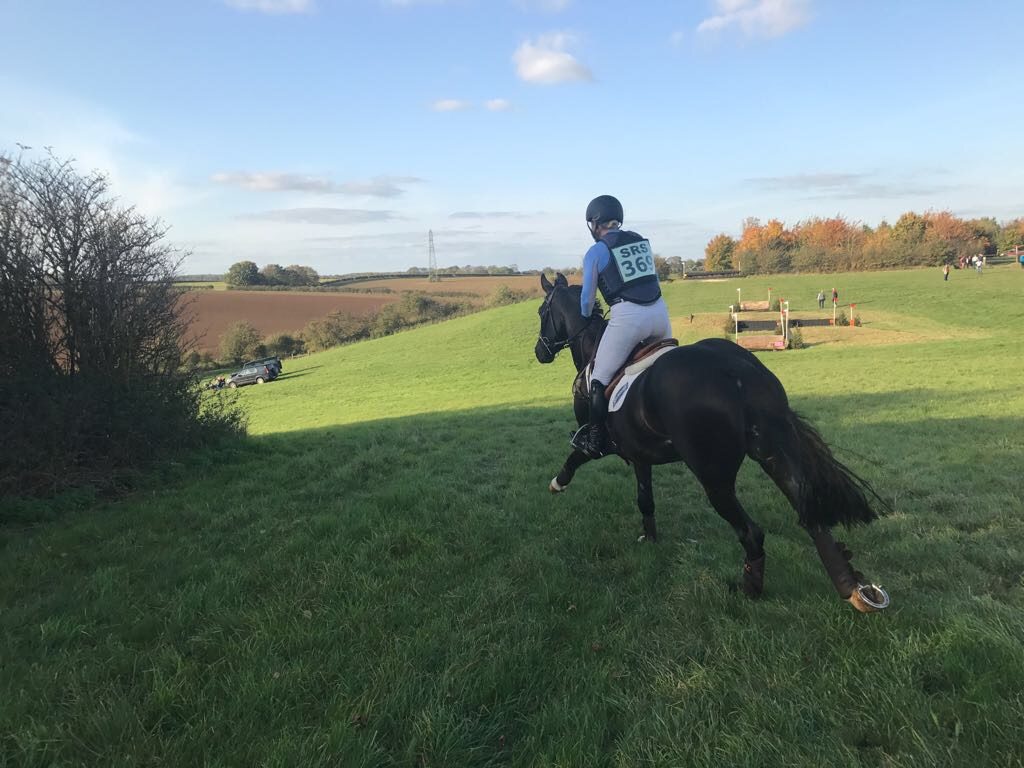 Jonty won which was nice for his 5,0000 owners and Jonelle was second on Marley which was nice for all of those who had slogged up to Oasby to watch him. Marley is now going to have a bit of a holiday while Maggie May has Pau 4 star firmly in her sights for the last run of 2017 for the team.