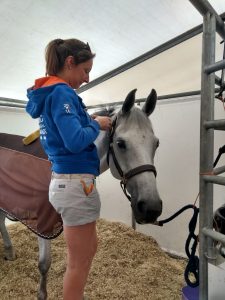 After the drama of the thunderstorm that threatened to cause havoc at the jog (but mostly stayed away with just some spitting rain) had passed today was warm enough to see the crew donning shorts in Salshausen.  Not that we are at all jealous in the UK as we sit through day 10 of torrential rain and top temps of around 10 degrees.  In June.  Seriously weather Gods?

Tim copped a Thursday dressage draw which was in the hands of the Gods as we cant request a day abroad when we only have one horse.  It worked in Ava’s favour in Pau last Autumn and it worked again today when she produced a fabulous test with no mistakes for a 25.8.  Tim was one of the only ones to use the arena familiarisation yesterday to do so in a jump saddle….he is such a horseman that he knows when to ask and when to make it a bit easy.  A jump saddle keeps you so much more off a horse’s back and Ava can only tolerate a rider on her back for so long before she runs down the “you can leave now” route!

The test itself was pure class.  If you didn’t know Ava you would think that she was simply the most divine, straightforward and helpful mare in the world who only wants to to her best for you.  In reality she is quite the witch who likes to throw a curve ball at you and uses her considerable physical strength to challenge you both mentally and physically.  Tim doesn’t have his usual  thoughtout plan for her in the warm up… he has to ride what she gives him and sometimes that can be cruisey and sometimes it is incredibly explosive!

Rather inexplicably the German judge had TP 5% below the other two judges which is a bit miffing…but it is a subjective sport and Luhmuhlen is a long way from being a dressage competition.

Tomorrow sees an easy day for Ava while Tim steps Falco up to the CIC 4 *S and whilst Falco did a great job at Hartpury last year this time he finds himself smack in the middle of a German superstar field so we wont be expecting him to be scoring quite as well as Ava!

And it is still raining in England…..