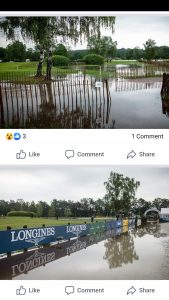 Cross country day dawned….. well, to say wet would be an understatement! Overnight a massive rainstorm had unleashed all its might upon Salzhausen and the entire crew woke up to a flooded truck park with bales of shavings floating around and Tim sent a short video showing the “river” zipping past the truck which had previously been “nice grass”.  He didn’t get out of the truck to video more so it was a proper boy video where he clearly only had his socks on and didn’t want to venture further than the edge of the living entrance.  Others were more intrepid and our very own Panda-Sue ventured further afield in order to send us these beauties which show a water jump that could accommodate the Titanic and the main arena looking like a marina.

Then… wow.  Cue in German efficiency and the whole shibang is on another level.  There are firefighters pumping water out of the truck park and on the track, they are organising things so that the stables do not flood, the OC is swopping the 4* and the 5* so the 5* gets the better ground, they are moving start times forward and keeping everyone in the loop at the same time.  Amazing.  So many venues in the UK simply quote “health and safety” and abandon.  To say that Tim was impressed, along with everyone else, is an understatement.

Admittedly the sandy soil is predisposed to drain well and that does help but it takes an amazing effort to change the schedule at a top venue like this.  Our best congratulations to Suzanne Assendorf and her team who do the most phenominal job!

Sue Benson is an owner who loves her horse and she sent me a video early this morning showing the lashing rain with the description ” Cross country day.. Oh God!” I think it is fair to say she is far more nervous than TP on cross country day and maybe that’s because Falco has given her some heart stopping moments in the past!  Today, however, on a fast draining and rapidly improving going he was what Tim described as ” really exciting”. He started off steady giving Falco time to get into the track as he was a bit green and then as Falco got more confident he stepped it up which he said “was really fun as he can seriously gallop now so it was a great feeling”. That great feeling lasted all the way until the last water when an angled brush at 19B got TP  ” jumped out of the saddle” and although he managed to make it to dry ground it was the walk of shame home.

Although, as Tim said, Falco need feel no shame! He did a great job, he impressed Tim with his heart and maturity and he will have taken masses away from this in experience.  He didn’t come here to win, he came for experience and he had done all the hard stuff at this stage! He leaves with the experience and the mystifying  notion that for some reason Tim abandoned him mid jump near the end.  I am sure that Ava will congratulate him and ask him exactly how he did it tonight.

So Ava and Tim headed out less than an hour later with Tim displaying his muddy arse as he galloped down to fence 1.  Older followers will remember the washing the breeches scenario at Tweseldown years ago but I think this time Tim simply didn’t have time to get changed! ( And not possible to withdraw because of!). Ava and Tim bizarrely set out in sunshine and near perfect footing and did the most incredible job around Ava’s first full up 5* star. ( Pau ended rather early).  They are such a team and they read each other and test each other… Tim made it look so smooth but he had no choice but to take a couple of strides out here and there as when Ava locks on and lengthens its best to go with her in the combinations to avoid a fight. 2 time added to the dressage is good enough to hold the overnight lead with not a rail in hand over Alexander Bragg in second.

As Jonelle commented tonight, despite some 4 inches in height and totally different dispositions Ava and Faerie Dianimo are similar in that they are feisty opinionated super talented grey mares that are possibly a little bit mad! They have the same exuberant front end, they are both super careful but you can throw the instruction book out of the window when you get on as its always a wild ride.  They both shake their heads when asked to come back and they are both uber talented.

Lets hope that they both win Luhmuhlen.