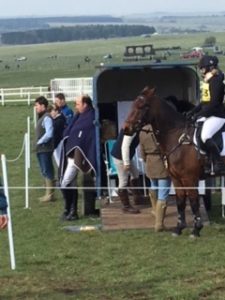 Larkhill is a fairly local ‘go to’ destination for 100’s and novices even if it does have a climate more akin to Siberia than Western Europe.  Normally the wind blows from the North East and the average temperature over the years has been around minus 12 .  There are no trees at Larkhill, just some withered stumps that have survived the brutal winter and are bent permanently in the East to West poise favoured by the local instructors as well.  But, in a bizarre twist of endless cancellations and horrible weather today Jonelle and I sweated on the way back from the dressage.

Photo Left:  Tim waits to chat up the SJ peeps.

To put this in perspective, we had both dressed for the arctic Larkhill.  Jonelle was head to toe thermals under her riding gear and I was 100% 4 ply cashmere.  ( Sounds great but I actually only have the 1 jumper!)  . So we arrived back at the truck after Faerie Magnifico’s  ( George) dressage sweating in the positively balmy conditions!

We were then greeted by the sight of Tim laying flat out on a yoga mat in the living.  Pretty bizarre  really but Tim was quick to point out yoga is not his thing but his back was hurting etc etc.. Hmmm.  Me thinks he likes the purple yoga mat.  He then tried to explain his 40 dressage on Spartaco ( Spartacus) which basically boiled down to bucking, broncing and wild canter work which is not at unusual at Larkhill. Mr Cin Cin was far better behaved in his novice for a 28,  a rail and a few time  for 9th while Spartacus some how pulled it out of the bag to finish 8th with his double clear in his section!

Then began the battle of the 100’s.  Tim and Jonelle were in the same section with Happy Boy and George. That is usually a competition in itself but since Larkhill had decided to run to times on the board for the SJ a proper battle ensued.  Jonelle got in first with some banana bread and some smart talking and sent me back to Tim with the message that she was good but he was on his own. She then jumped a lovely clear round and sped back to get changed for XC.  Tim was back on his favourite purple yoga mat by this stage so was a bit dismissive.  Jonelle then headed out cross country for her first trip on George and Tim stepped into the SJ to start negotiations with the gate lady.  His legendary charm resulted in a dash back to the truck for Happy Boy and a rather unlucky rail for 4 faults.  He then sped cross country for a lovely clear and a great start to 2018 for Happy.

Basically Jonelle would have won if she had not picked up a couple of time faults for going too fast ( Not something we often say abut Jonelle!) and Tim would have been further up the list has he not sped around the track as well!

It was a bit of  a drawn out day but good to get some runs… everything is up in the air at this point as we just re route and re plan after every cancellation….. 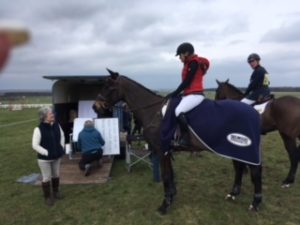