Deep in the depths of Norfolk there is a massive event going on but with hardly any wifi, next to no phone signal and certainly no livestream its not so easy to keep track of what’s happening!  It is a beautiful part of the  country and the Hall itself at Houghton is steeped in history and at the forefront of contemporary outdoor sculpture which is displayed in the grounds.  It is also one of those events where a rider without an e bike is considered pitiful as everything is a very long way from everything else.

The truck park and stables make for a real bonding experience for horses and riders alike.  No swiping through phones here, it’s talk to your neighbour or stare into mid space.  Occasionally there is a yelp of excitement when a phone is angled at a precise degree out of a truck window with an arm on full extension as a bar of signal appears but it is generally short lived as a passing bird has snuffed it out in a jiffy. 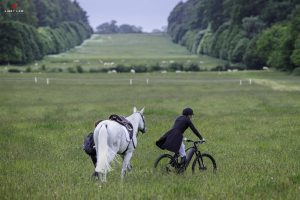 The horses get pretty cosy too and for the young ones at their first full on three day they buddy up like boys on a stag do. It’s a fair old hack to the dressage arenas and to then have to leave the other horses and go into a massive arena ( well, 60 by 20 does look massive when you spend most of your career to date in a 40 by 20) all on your own is quite a big deal.

Jarillo (Milo) is a fairly confident chap but even he was a little quiet and didn’t show off as he can in his test.  It was good, Tim was very happy with him but he showed his lack of experience by withdrawing slightly into himself and losing a bit of his usual flamboyance. As Tim says, it’s all part of the learning curve and Milo will have come on from the experience.  A 28.9 is a great start and Milo was happy to get back to his buddies.

Viscount Viktor is all swagger and bluster normally and he decided that it was no big deal to be in the arena alone and executed some lovely trot work. As often happens with swagger and bluster it suddenly deserted him in the walk and he felt the need to call out for his mates for some reassurance.  Since his mates were a couple of kms away ‘no answer came the stern reply’ and Viktor spoilt his simple change in the canter by rather dramatically stopping and running backwards which wasn’t really necessary but enough to drop him out of the 20’s and into a 32.

Spartaco  Sparty) has done enough to know he will get back to the stables after his test and Tim was really happy with his 29.9 in the 4S.  It was a good, solid test and he continues to become more and more established at the level and as always, his laid back demeanour serves him well.

So as “Houghton does what it does to young horses” Tim is pretty much ready for anything this weekend with his 3 Long boys! It is good for them and it is an entirely different experience to the one that the much missed Tattersalls used to give them in a small, compact and incredibly busy site.  They need to go through all of the venues before they gain the confidence to become the world savvy characters  that the top horses imbue.