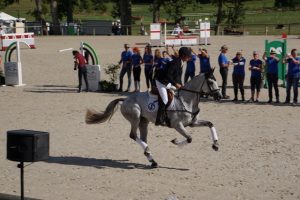 Well they call it the Glorious 12th in the UK for reasons of shooting the wildlife but it sure was the Glorious 12th for Tim as he smashed the CCI 3 star win with Ascona M! Under pressure from 2 clear rounds from the two placed behind him and with not a rail in hand he entered the arena knowing only a clear would seal the win.  And they delivered.  Its another one to add to Tim’s FEI tally with wins at every level from CCI 1 star through to CCI 4 star and its such a cool story as its the ultimate “Tim and Jonelle” story as well as Jonelle has produced this mare through to two star level.  Tim and Ava did not get off to the best of starts… Tim likes his horses to be friends with him on a personal basis and he said at the start ” She doesn’t dislike me but she doesn’t like me either, she just does not care either way!”.  I think the aloof and utter supermodel Ava actually likes him allot now to pull out a performance like that!

Not to be outdone in the CCIO 3 star first timers Kincooley Cruising (Minnie) and Pats Jester (PJ) were also pulling out all the stops for their debut performance.  Minnie pulled out a clear round to finish inside the top 12 which is amazing out of 73 starters.  PJ just tipped one rail which was still good enough to elevate him up the leaderboard and into the top 15.  Pat Maitland would be so proud of him…quite the best of her homebreds by far.

Its been a fabulous weekend for Team Price and no, Jonelle has not has her baby yet before you ask!

Ascona M (Ava) for the CCI three star at Haras du Pin and two first time advanced runs for Pats Jester (PJ) and Kinccoley Cruising) Minnie.  Haras was the setting for the notoriously soggy WEG in 2014 where Classic Moet and Jonelle had such an amazing run cross country and since it was pouring rain when they arrived there was much muttering about the chance of a repeat performance of WEG!

The sun did come out though and in the small but classy CCI three star Ava took the lead with a 39.5 which is pretty impressive at her first CCI 3 star.  The French were hot on her heels and in the CCIO 3 star Minnie did a great test for 44 with PJ not that far behind on 49.  The CCIO is a Nations Cup so is chocabloc full although since NZ only has Tim and Sir Mark Todd out there we are not a part of that.

Cross country day today and a long wait while the two star horses ran cross country before Tim got underway with Ava.  Describing the round as pretty much foot perfect they were one of only 4 combinations to make time and held onto their lead. Ava really is the superstar we all thought she would be!

It was a big step up from intermediate and 2 star for both PJ and Minnie and a tough enough track for them to cut their teeth on.  Minnie dealt with it beautifully to come home with just 6.8 time and to sit in 12 th place and then PJ set out to make himself officially an advanced horse and did it really well to come home clear with just 3.2 time.

All in all a really great cross country day.  Chris Burton leads the CCIO3 and the two star so its good that the antipodeans have a stranglehold on the leaderboards across the classes!