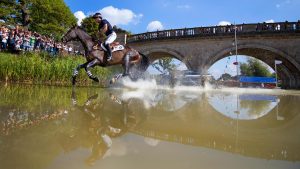 A stunning photo that graced The Times last week!

But with Burghley done and dusted it was back to the bread and butter of a busy weekend at a one day with multiple rides for Tim and Jonelle’s return to the competition scene for the first time eventing in 2017.

Whilst Tim was doing the first of his 5 dressage tests Jonelle was looking unsuccessfully for her back protector which was kind of funny really as apparently it had been moved out of its normal spot!  With Leslie Richards in charge of Otis Jonelle hopped onto Faerie Dianimo ( Maggie May) and it was the coolest thing in the world to see Maggie May flipping her front legs up as high as she could in some practice extended trots outside in the muddy wet warm up.  The last time Maggie May competed was Rio and she had lost her mediums by then… this was more like the Maggie May that scored a 32 in Luhmuhlen!  Obviously there were no crowds in the field at Gatcombe so the Princess reverted to normal one day tactics and did a pretty hot test for a 40.  We couldn’t be happier with a 40… if she had done a 25 I think we would have been seriously worried.  A confident and careful double clear that followed was just the ticket and Jonelle, who looked as though she had not missed a day, was glad to get the first run under her belt.

Tim was scoring some great marks in his tests despite being pushed for time in the warm up which always happens when you are riding 5. Falco ignored the rain and the mud for a 25 in his section, Providores ( Bruno) was brilliant in his for a 28 and Pats Jester just gets better and better for a 27 in his.

Flashy superstars Cooley Showtime ( Eddie) and Ascona M (Ava) were the grown ups of the day and they got shown up by the young guns!  Eddie was a bit of a brat all day ( just to make a change!) and was desperately seeking a way to be the centre of attention as he was properly miffed that he got so little of Tim’s time! After a respectable 30 dressage he then got a little on the wild side for the showjumping and picked up 8 faults.  Of course Tim blamed his ride through the combination but Eddie is a handful when he wants to be!  He was duly anchored cross country for 32 time faults as his Blenheim 8/ 9 year old CIC 3 star warm up. Ava found the mud and drizzle not particularly suitable for a supermodel and posted a 32 and just tapped a rail out.  She is in the ERM at Blenheim and there was no need to run her round an intermediate so she finished on that note and looked disdainfully round the muddy field as she hacked back to the truck.

Bruno was unlucky to have a single vertical for 4 faults but jumped the rest of the track showing all of the promise he did in NZ.  He is heading to Ireland for his first CIC 2 star at Ballindensk so he schooled round the cross country adding 35 time faults to his tally for the day.  Falco’s double clear was good enough for 9th place even though he picked up 23 time faults on his way round!  He is heading off to France in a few weeks for Lignieres and his first CCI 2 star.  He has two wins out of three starts at FEI level so is on song to add to that….

And today it was Pats Jester that picked up the best placing for 5th place with his double clear and 15 time cross country.  Often the bridesmaid Jester is really coming into his own now that he is officially an advanced horse with Jardy CIC 3 star under his belt. He is the ultimate professional, he doesn’t have the diva mentality of Eddie or Ava but he has moved his way up through the grades by working hard and listening to Tim… he is the dude of a horse that everyone hoped he would be and I think he should be right in the mix out at Ballindensik in a couple of weeks where he tackles his first CCI 3 star.

Jonelle and Classic Moet jumped quite a bit in Spain in the late winter / early Spring but they have not done a dressage test on grass since Burghley last year.  Admittedly on the porky side of fit she does now sport the most amazing neck and she actually was really good in her test to produce a score of 31 which was no disgrace. Jonelle took both her mares showjumping yesterday and whilst they both jumped clear then what works for Maggie May doesn’t always suit Molly and she took a bit of time to adjust to the the mud and grass underfoot and picked up 12 faults.  They looked brilliant cross country though and both finished with a huge smile on their faces which was great to see.

Quite staggeringly Jonelle now heads to Blenheim for the ERM CIC 3 star with Molly next weekend…. what else would we expect?!!