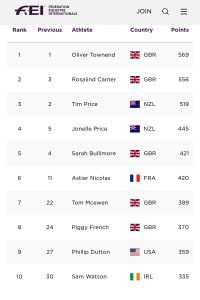 The World Rankings are out for the end of September and of course have been much affected by WEG performances.  Still, despite WEG not being stand out performances of the year for Tim or Jonelle, their consistency has rewarded them yet again and they remain the highest ranked Kiwis at number 3 and number 4.

Jonelle and Tim are at Lignieres this week which doesn’t count towards rankings points but Le Lion D’Angers not only does ( as a Championships) but it carries extra points as well.  Then Tim has Pau CCI 4 star so the battle of the World No. 1 and the even more important battle between Tim and Jonelle is certainly not over yet!

Good to see Sam Watson of Equiratings fame in the mix too.. he has made history by being the first Irish rider to make the top 10.