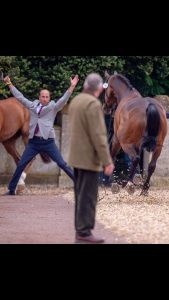 Plenty of drama at Badminton today which is quite unusual for the Wednesday!  One of the NZ horses managed to get loose at the top and gallop home which doesn’t always end well ( this time it was fine) which was not part of anyone’s plan and the rider of that horse had just had a 4 year old go over backwards on him in the warm up of the BYEH!

Rumour has it that one of the Irish riders got his stirrup caught on one of the white posts that string the edges of the dressage practice rings and then the horse bolted, pinging posts and white string out behind them….

Izzy Taylor lost Call Me Maggie May on the jog strip just as Tim walked through the arch with Bango    (Uno). Uno’s first glimpse of Badminton was a mare galloping flat out down the trot strip towards him and his normally cool and clam rider flapping his arms like a windmill in front of him. Uno is a pretty balanced horse and doesn’t suffer the nerves that get to Ringwood Sky Boy ( Ozzie) but he had just had a moment when his stable door came off its runners and was still a little wide eyed at that!

Manfully Uno went somewhat cautiously down the trot strip but came home with the best medium trot I have ever seen!  Ozzie just wanted to get the job done and remove himself from the public eye and he did just that being the old Pro that he is.

We have supergrooms Lucy Miles and Charlie Millegan in charge of the ponies, 2 horseboxes and 1 Boxer plus Colin Price on site and Jonelle will be around from tomorrow along with Otis and Harriet.  Word on the street is that the course is plenty tough enough and we have lots to look forward to!