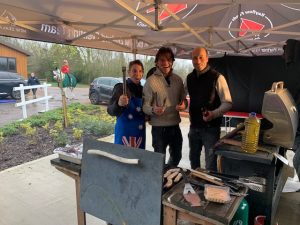 The Kiwis were keen to support near neighbours Australia when Jenny Levett had an idea about a fundraiser for the bushfire devastation  and so Tim Price joined fellow lecture demo riders Chris Burton, Sam Griffiths, Bill Levett, Paul Tapner and Piggy  French with a few star ‘guinea pigs’ to teach.  Lowlands Equestrian Centre which is also an RDA base kindly loaned the venue and the hastily arranged day ran like clockwork thanks to Jenny Levett who pulled it together and Paul Tapner who organised the whole programme.

Dan Jocelyn and Bruce Haskell ran the #sausagesizzle BBQ which cooked for most of the day and whilst Bruce Haskell lost half a BBQ en route ( apologies to anyone on the M40 who picked up some unwanted steel in their tyres) Dan Jocelyn went all “cheffie” and refused to use the BBQ tongs as the “grip wasn’t good enough” and resorted to the stumpy version which meant he lost all of the hairs on his left hand.  Once you got over the smell of burning flesh it was quite amusing.

Tim, as always, was a hit with the very knowledgable crowd and they had clearly been to allot more lecture demos than us.  Whilst we shivered in the cold they sat there in their varied attire of sleeping bags, rugs, ski clothes and hats and looked smug as we ended up hovering round a BBQ in the break that had a token sausage on it as an excuse to keep the gas burning!  We learnt allot about mass catering including that food must maintain a 70 degree temperature and that the vegans are also a pain in the arse.  (And yes, I may have touched  my hair en route to shoving a sausage in a roll but it was only so I could see as the 40 mph wind had swept it across my face).

Tim and his fellow riders lectured on the basis of “my favourite exercise” which in Tim’s case was some raised trot/canter poles.  We had built it quite close to the crowd so that they got the full impact but that didn’t really help TP as his student, 5 star rider Alex Bragg, had bought a mare who was, to put it simply, terrified of people.  The mare was very cute and careful and left most of the poles intact but she rarely went near them which sort of made the exercise a tad wasted.  Tim did a great job though and then was involved in Tapers “Race Day” which was a sort of dressing up game that involved riders on foot jumping the track and was aptly referred to by Burto as “Typical Tapers, he always did love dressing up”. Tim was totally poleaxed by the Levett twins Ursie and Josh who rugby tackled in unison and for a brief moment we thought that Tokyo was scuppered before TP rose from the ground like a phoenix and we could all breathe again.

A great day for a great cause and we definitely did our bit for the fried koalas.  On a serious note we raised a huge amount of dosh for a cause that is so close to all of our hearts and it was a truly unique thing to see such a bunch of Aussies, Kiwis and Brits all appear at the same venue.  And we did it twice…. back to back runnings meant we doubled the take.  Tim Price, take a bow.. charity box ticked for a while.