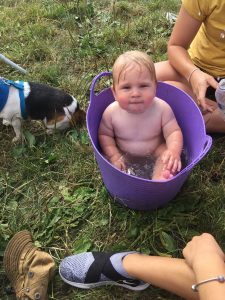 From Aachen to Aston was no mean feat and with 6 horses on the truck after not getting home from Aachen until 11pm shows its not all glitz and glamour!  At least the weather was the same with it being hot and sunny and also the amazing ground work that Aston had done with literally thousands of litres of water having been poured onto the track made a huge difference.  You only had to walk around the car park to see what au naturel ground is like at the moment!

Jonelle just had 2 classy advanced rides and she started with Classic Moet ( Molly) who was having her first start since winning Badminton. Molly looked magnificent and the dressage judge clearly thought so too as she was awarded a 26.  The show jumping always causes problems at Aston as not all the horses seem to like the surface but Molly loved it and jumped her socks off for a really classy clear.  Jonelle let her run on cross country to take advantage of the watered ground… its not often at the moment you can gallop on grass!  1.8 time left her in 2nd place and a great comeback run.

Cloud Dancer ( Marley) wowed the judges with a really flashy test for a 20.  It was pretty awesome to watch and when he came over to the showjumping he looked pretty pleased with himself.  He jumped a lovely round too and was a bit unlucky to just tip one of the latter fences.  He and Jonelle simply scorched round the intermediate track where he looked super happy and confident and they came home with the fastest time of the day for a whole 12 seconds under!  Unsurprisingly he won which would have made him a happy chap to have beaten the Badminton winner but Molly doesn’t care about things like that, she was just looking for food!

Tim had Spartaco in the intermediate and he did a nice test for a 29, jumped a beautiful clear and had a good clear cross country where Tim sauntered round to add 18 time to his score.  Spartaco is looking classier and classier and he is a stunning horse to look at at well.

The advanced class was clearly an unofficial Team GB WEG longlist outing which presumably explained why the dressage test was the 4 star B test and the showjumping was huge with a very tight time.  Poor Falco picked the wrong year to make his advanced debut at Aston!  As always he coped manfully and if was a bit shocked to find that the dressage test seemed to go on forever and contained 4 flying changes he hid it pretty well to score 70% which is not to be sniffed at!  He then tackled the showjumping with his usual gusto and showed all his ability to go clear while Tim rode his usual young horse masterclass and didn’t cut any corners to pick up 8 time.   Cross country was a breeze and Falco ticked off his first advanced in style.

Pats Jester ( PJ) has been on the recovery trail after face planting a couple of times this season and he did a good test for a 32 and then somehow managed to plough straight through fence 3 in the showjumping which sure was not part of the plan! Tim’s quick thinking saw him kick on for the next fence before they had time to ring the bell and he then put the confidence back in place by the next couple of fences and then they had a fabulous ride cross country to finish the day in fine order.

Up in the Air ( Harry) also had a bit to prove after Barbury and he did in in fine style with a 33, a very smart clear round in the showjumping and a brilliant cross country round where he found everything more than easy. It was good to see him and Tim looking like a really cool partnership and it was the end of a very long day in the sun for the whole team.