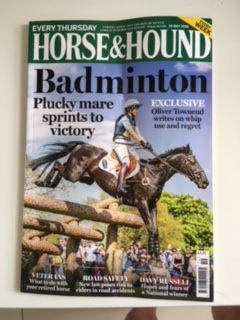 Back to Aston Le Walls and Jonelle… the current and well deserved cover girl for Horse and Hound… had 3 feisty girls to contend with who were all doing their first intermediate which meant a bit of hard work for the jockey!  Hester was undoubtedly fresh for her dressage and posted a 38 before stepping up and jumping a great double clear at her first go.  Grappa Nera ( Grape) is equally as opinionated on the flat and had plenty of back chat for Jonelle which resulted in a 41!  But as little black mares are wont to do she bucked up her ideas when it came to the jumping and also went double clear.

Tim was having a ball with three advanced horses and just one first timer.  Mr Cin Cin is a proper ginger hothead at times but he dealt with this step up manfully, posting a credible 33 and a double clear.  That’s a nice way to start your upgrade!

On the advanced side Up in the Air ( Harry) had his second start with Tim and enjoyed it very much with a 31 and a cruisey double clear.  He is a kind and generous horse and he and Tim are building a great partnership.  Cekatinka sneaked into Spartaco’s intermediate slot and went out for a play as her only start this year has been an Open Novice at Aldon!  A fairly buzzy dressage is really what you would expect from a fit and raring to go little mare and 31 is hardly a disgrace but she also tipped out a rail ( cue drama!) before popping round the cross country track for fun.  I think Tinka was entitled to have a look around… Aldon was so cold it was a case of do your job and get back to the truck as fast as possible and before that it was the rain and wind at Boekelo!  I am sure, being the ultimate professional, she will come out with her working hat on next start.

Talking of ultimate professionals brings us to Pats Jester ( PJ).  He just ticks all the boxes everytime with the least amount of drama possible!  He scored a 28 in his OI section, added just 2 seconds over cross country time to it for a win and would have been absolutely modest about it cos that is the sort of guy that he is.  His next start is a CIC 3 star but we have not told him yet that its in Poland!  Baborowko is where the cool guys hang out in Eastern Europe… Tim hopes!