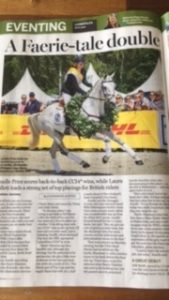 Tim and Jonelle have a team of 8 horses out in Arville and they kicked off things today with three CIC 2 star tests for Jonelle and 1 for Tim.  Nothing like some back to back dressage!

After the first 45 horses have gone we have a Price sweep of the leaderboard with a 1, 2, 3!  How cool is that…

Jonelle leads with Cooley Showtime ( Eddie) on a 27.1.  We all know Eddie is beautiful and he is a proper advanced horse but he has only done West Wilts ON since Blenheim last year and he also has a wicked sense of humor so it is still a fair achievement!  Next up comes Spartaco ( Spartacus at home) who posted a 29.6 which is a cool score for a 7 year old in that field and Tim must have been happy with that.  And in third place, just 0.2 behind Spartacus is Hester who is also just 8 years old and she must have made a Herculean effort to control her nerves as they can get the better of her if she thinks she may have made a mistake… mistake free it clearly was.

Grappa Nera ( Grape) is a little bit behind her stablemates on a 35 but she still makes the top 20.  It looks as though Grape really did try and be on side apart from some issue with a right small circle where she picked up a couple of 2’s! I have no doubt Grape is so looking forward to the jumping phases… she reminds me of Maggie May in so many ways and that didn’t pan out so badly!

Tim has two CIC 3 star dressages tomorrow and they both have one each in the ERM CIC on Saturday morning.

And despite Jonelle winning back to back 4 stars Horse and Hound put Mary King on the cover.  Sigh. Still, she got a nice write up a bit further in though!